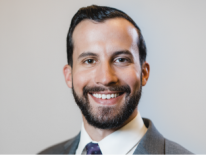 Position/Title
Senior Deputy Director and Chief Strategy Officer for the District of Columbia Department of Employment
Alan Karnofsky is the Senior Deputy Director and Chief Strategy Officer for the District of Columbia Department of Employment Services (DOES). As Senior Deputy Director, Mr. Karnofsky oversees the Office of Youth Programs, Office of Labor Market Research and Performance, and Office of Training and Professional Development. Prior to this position, Mr. Karnofsky was Deputy Chief of Staff for DOES, where he oversaw the Office of Legislative Affairs and helped to coordinate agency-wide events while also assisting the Director in preparation for meetings, coordination of strategic goals, and ensuring efficient and effective delivery of DOES programs and services. Wihin these roles, and with his past experience working directly for the Executive Office of the Mayor and the City Administrator, Mr. Karnofsky has fostered positive relationships and liaised with the Mayor’s office and DC Councilmembers, prepared memos, talking points, and other materials for senior government officials, prepared draft testimony for multiple principals throughout DC government, as well as performed research on policy issues and has recommended policy changes. Additionally, Mr. Karnofsky regularly connects with constituents to ensure their needs are being met, leads organizational change, manages special projects, plans and coordinates events, and enhances internal efficiencies by leading process improvement initiatives.
Previously, Mr. Karnofsky worked in the Office of the City Administrator where he oversaw the Deputy Mayor for Education and the Deputy Mayor for Greater Economic Opportunity clusters. Prior to that, he worked as the Director of Operations in the Mayor’s Office of Talent and Appointments.
Mr. Karnofsky is a Ward 7 Marshall Heights resident. He is a Master of Public Administration graduate from American University, with a concentration in State and Local Government. In 2013, Alan graduated from the University of North Carolina at Chapel Hill with a Bachelor of Arts in Political Science. Mr. Karnofsky grew up in North Carolina and loves running, working out, and playing tennis.
Contact Email:
[email protected]