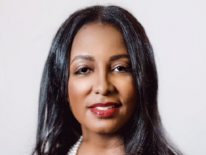 Position/Title
Interim Deputy Director of Programs for Bureau of Economic Stability
Monnikka Madison is a bilingual, highly-recognized, 20-year expert in social insurance administration. As the Interim Deputy Director of Programs for the Bureau of Economic Stability and Benefits within the D.C. Department of Employment Services (DOES), Monnikka is a primary architect in the planning, development and administration of Washington D.C.’s high-profile Paid Family Leave program and the long-standing Unemployment Insurance program. Assuming her executive position in 2018, she leads a team that conceives and executes the Office of Paid Family Leave’s high-level prerequisites: building the secure, all-encompassing administrative infrastructure, establishing the District-wide system for the collection of employer taxes to fund the program, wholly creating the rules and regulations that will govern its practices and educating key stakeholders and affected masses on the program’s benefits and operations.
As a dedicated public servant for the past two decades, Monnikka has worked extensively throughout her tenure to champion performance improvement efforts and to ensure program adherence to innumerable federal and local regulations. In her previous role as the Chief of Benefits for the DOES, Office of Unemployment Compensation (OUC), Monnikka successfully implemented changes that facilitated effective and efficient service delivery, yielding some of the OUC’s highest performance standings and key Unemployment Insurance (UI) national rankings. While in this role, Monnikka spearheaded aggressive campaigns to identify and reduce UI waste, fraud and abuse and developed and led initiatives to reduce the District’s Improper Payment Rate. These achievements and improvements in program accuracy and integrity encouraged more efficient administration of UI and ultimately led to the OUC’s removal of its At-Risk designation in 2017.
Monnikka is a Washington D.C. native, although raised in Barranquilla, Colombia. She earned a Bachelor of Arts from the University of Maryland, College Park. A life learner, she recently completed the District’s Executive Leadership program through the George Washington University’s Center for Excellence in Public Leadership, where she further developed her prowess in fostering performance excellence and innovation.
Contact Email:
Monnikka.Madison